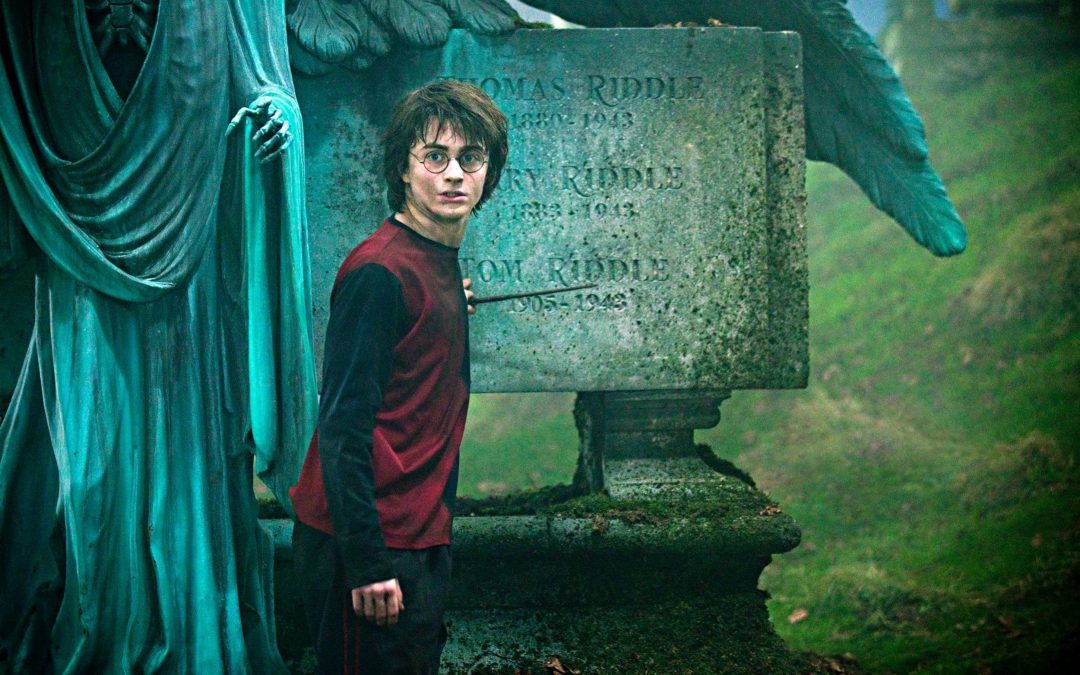 A few days ago, I rewatched Harry Potter And The Goblet Of Fire. As the fourth instalment in the blockbuster Harry Potter franchise, there are dragons, wizarding cups, and the return of a dark wizard.

Although the film is not perfect (for one, the subplots require more fleshing out) it’s still terrific, and writers should study it to improve their craft.

This blog post will not discuss the original book. Instead, it will focus on the film adaption.

Here are 10 lessons writers can learn from Harry Potter And The Goblet of Fire (film):

Lesson One: Show Off What You’ve Promised Your Audience

A complaint viewers had about HPATGOF is that we never saw the Wizarding World Cup. Other noteworthy scenes (The Death Eaters attack, the plotline with Barty Crouch Jr) are not fleshed out. For writers, this is a valuable lesson in understanding your audience.

Whatever you promise your readers (say, an epic dragon battle) it is important to deliver, or at least have a compelling reason not to. No, you can’t please everyone. And HPATGOF does a solid job in what it does show us.

I don’t believe the film had to feature the Quidditch World Cup, but it should’ve fleshed out subplots relating to Voldemort’s return and Barty Crouch Jr. By doing that, the film would’ve had more meat on the bone, and add a rich gravitas.

Remember: there is nothing wrong with giving audiences what they want. There is something wrong when it’s predictable or safe. Yes, the audience will expect certain story beats. And as writers, we must make it compelling and interesting.

Lesson Two: Use Symbolism To Foreshadow Future (And Past) Events

There is a visually gorgeous scene in the fourth Harry Potter film that uses stained glass. In that scene, Neville Longbottom looks at the glass of a melancholic man whilst it rains. It’s evocative and reminds the audience of the hidden pain that exists within Neville and the story of Harry Potter.

You can watch the video Snowy Fictions made about the stained glass here:

Later on in the Harry Potter series, we learn the tragedy of Neville’s parents. This makes rewatching HPATGOF a bittersweet yet rich experience. This is mainly because the filmmaker does not reveal everything about Neville in this moment: instead, there is a lingering moment of mysterious misery.

There is an expanding cosmos of depth to many Harry Potter characters like Neville. However, a sophisticated writer knows what information about the character to reveal to the audience. All writing benefits from subtety and symbolism, however, it requires skill and caution.

The most dynamic characters in fiction do not reveal all their secrets and traits. Also, effective writing knows how to use symbolism to great effect.

In The Goblet of Fire, we are introduced to new spells and Wizarding schools. One of the best things about the Wizarding world is how expansive it feels. No matter how well we know it, there are always new characters to hear about or underworlds to explore.

When you write your story, you can create an epic sense of ‘expansiveness’ in many different ways. Some of them include:

Of course, there is little point in creating an immersive world if you do not have interesting characters, themes or story. Many fantasy authors are flawed when they think that worldbuilding automatically makes their fiction interesting.

I have a blog post that goes into depth about this problem.

Lesson Four: Create Juxtaposition Between The Light And The Dark

Arguably, the greatest strength of Goblet of Fire is its climax. Our protagonist, Harry, alongside the doomed Cedric Diggory, find themselves in a graveyard. After Wormtail murders Diggory on Voldemort’s orders, Harry is forced to witness the rebirth of a monster.

The scene is perfect, particularly the bone-chilling moment when Voldemort touches Harry’s scar. Not only that, but the scene uses imagery of death (the graveyard) and expands the meaning of ‘love’ in Harry Potter (as suggested by the deceased appearing).

However, the reason why this scene works is because of context. In previous Harry Potter adventures, Harry was the winner. Not only did he and his friends survive, but he was able to save the day and even score the house cup for Gryffindor. Harry’s own experiences with death was minor: he does not recall his parents’ murder and does not really mourn either Quirrel or Barty Crouch.

Lesson Five: Mystery Is Your Friend

The Harry Potter series is mysterious. From moving staircases to jumping chocolate frogs, the Wizarding World presents many surprises to the audience.

Not only does that make for an engrossing story, but it also helps the Wizarding World seem expansive, as if anything could happen. This is terrific, as it results in an unpredictable story. In The Goblet Of Fire, mystery is used in many ways. One of them is within the characters of Igor Karkaroff and Barty Crouch Jr. The film does a good job at arousing our curiousity in those characters, although Karkaroff could’ve benefitted from more development.

However, it is not just plot points that are mysterious in the Harry Potter universe. Images and symbols are too. The shot of the green dark mark remains one of the most arresting images in the whole series. This is because the audience is unsure of its true narrative significance until future movies.

Although it is tempting for writers to rely on exposition, it is best to use mystery and narrative suspense. Give the audience enough information to understand the story, but not too much, that they’ll find themselves bored.

There is nothing wrong with teenage romance. Considering that Harry Potter is a series that prides itself on how it explores teenage issues, it is fair to expect romance in the narrative. However, romance is a thorny topic that many viewers dislike. Does that mean writers shouldn’t bother? No, of course not. Sometimes writers must make narrative choices the audience may not like.

However, there is a fine line between acceptable romance and sugary-sweet romantic humour. The Goblet Of Fire‘s use of romance isn’t compelling. The scenes between Cho Chang and Harry Potter drag the narrative, and Hermione’s relationship with Viktor Krum doesn’t result in much.

That being said, HPATGOF does not stuff romance in the narrative at inappropriate times. That’s a problem many viewers had with The Half-Blood Prince. Although writers cannot please everyone when it comes to writing romance, they must understand that there is a time and a place for it.

A problem with The Goblet of Fire is that certain characters are not fleshed out. Even well-established characters like Snape and Draco do not have much screentime. This is a shame, as a strength of the Harry Potter universe has always been the characters, even if they are introduced later on in the series.

It’s difficult to not shake the interpretation that the Goblet of Fire does not make the most of its characters. Although I appreciate the depth given to Harry, Ron and Hermione, (they are terrific here), the rest of the cast are given little meat to work with. Whilst that is not true for everyone (Rita Skeeter is terrific, as is Mad-Eye Moody or Barty Crouch Jr.) it is certainly true for Fleur Delacour and Viktor Krum.

Creating characters is hard. However, writers must demonstrate, within the narrative, the various lives that inhabit the fictional world created. The Goblet of Fire, to its credit, makes terrific casting choices with Ralph Fiennes as Lord Voldemort, and Brendon Gleeson as Mad-Eye.

As viewers, we learn alot of information during The Goblet of Fire. Here is a short list of all the information the viewers learn about the Wizarding World:

However, we learn about these elements in unique and interesting ways. For one, we learn about Beauxbatons and Durmstrang from seeing their transport vehicles, and how they enter the Great Hall in Hogwarts. How dull would’ve it been if we were just told about the schools, and we couldn’t see for ourselves what they are like?

In Harry Potter and the Goblet of Fire, the exposition has double meaning. It does not exist solely to provide information, but to illuminate characters and to provide symbolism. A fantastic example is Mad Eye Moody’s lesson of the three unforgivable curses. In that lesson scene, we get greater depth regarding Neville Longbottom. We also get foreshadowing on the narrative importance of Avada Kedrava in Harry Potter’s relationship with Voldemort.

As writers, we should make our exposition interesting. The audience are more likely to remember it as well, and it makes for an engaging story.

The Goblet of Fire stands out because it took the Harry Potter universe into a darker direction. We even have Voldemort, the epitome of death, put his feet on Cedric Diggory’s body, whilst mocking him. Unforgivable curses are used on teenagers. And it’s all because of Voldemort’s return into the story, and what it means for our favourite characters.

Suddenly, the candy cotton coloured universe of Hogwarts is scary and nightmarish. Yes, the Wizarding World is bewitching and delightful in its quirks, but that fades away once Voldemort is back. Not only that, but the Goblet of Fire makes Voldemort’s return as traumatic as possible for Harry. Our protagonist is not getting off easy.

Writers should tread into dark waters with their writing. Although it is scary to harm beloved characters, it is necessary for a rich story. How can viewers value the safety and wellbeing of their favourite characters if it is never jeopardised? Great writing reminds us of the monsters that lurk in the dark and in the soul of every human being. By showing a dark mirror to your world, you may create layers of valuable depth that readers will love.

During The Goblet of Fire, the moon-glass wearning headmaster acts in irratic ways that make little narrative sense. For one, he is gruff and harsh. Contrast that to previous entries into the franchise, where Dumbledore was counted on for his softness and gentle nature. There is no explanation for why Dumbledore acts the way he does in The Goblet of Fire.

Although I find Dumbledore’s characterisation humorous, it does cheapen the overall narrative and comes at the cost of tension.

What are your thoughts on Harry Potter And The Goblet Of Fire? Comment below.