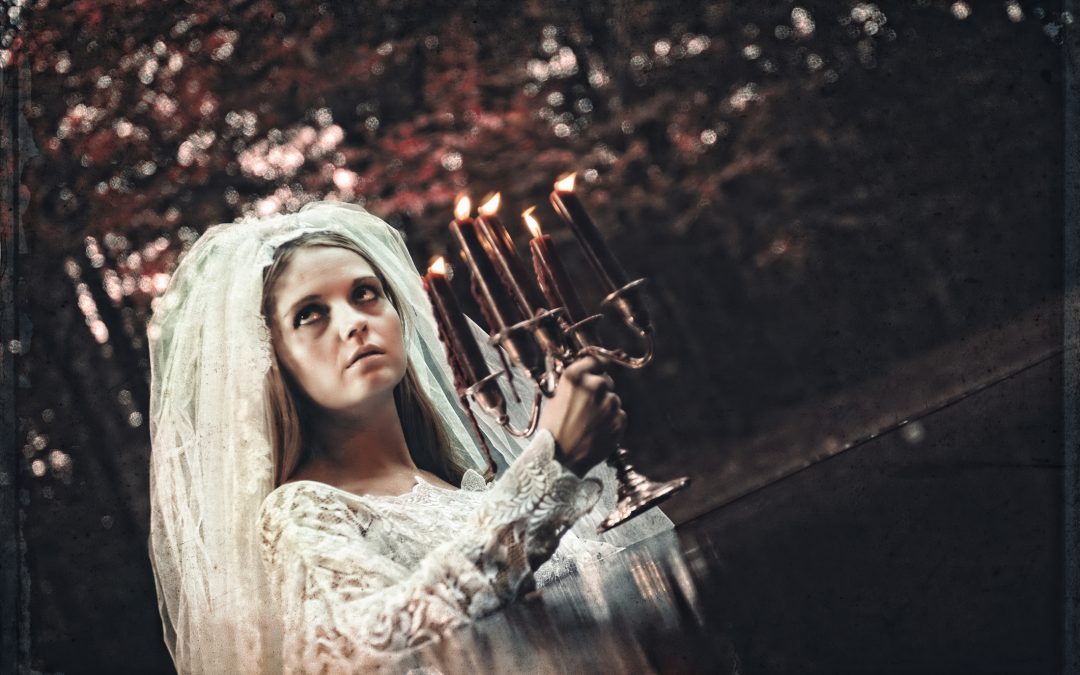 Want to read a brilliant fairytale?

You can’t go wrong with Angela Carter, whose short, enchanting tales manage to enthrall readers for decades. She has the grit of the Grimm Brothers, the imagination of Hans Christian Anderson and the social commentary of Margaret Atwood. Her collection, titled ‘The Bloody Chamber and Other Stories‘ is a twisted, scary yet delightful journey. Like Alice going through the rabbit hole, readers of Carter discover curiosities through her magnetic storytelling.

In this post, you will uncover how Angela Carter writes a fairytale. There are no spoilers.

The Use Of Lush Prose

Carter’s prose is lush, detailed and sensual. All five senses are engaged, and whether Carter is describing perfume or an enchanted lion, she transports the reader into a world of her design. Lush prose can seem ‘purple’ or even pretentious. But Carter matches her ambition with storytelling skill. She plays ‘mind-games’ on the reader’s expectations (how will this fairytale end?) and even when describing gore in The Bloody Chamber, she does so with beauty and poise.

However, Angela Carter never undercuts the evil of Bluebeard or the many villains in her fairytales. Many of her stories are frightening and bloody. Carter graces the most horrifying situations with poetry and style. (See: The very short Snow Child).

To often, many writers presume storytelling operates on a micro level. They’ll fuss over word choice and sentence syntax, but pay little attention to macro concerns such as having a satisfying ending, strong characterisation, a developed theme and an engaging story. Angela Carter is a master storyteller, at both the micro and macro level.

The Use Of Humour

Angela Carter is funny, and her rendition of Puss In Boots is easy to cherish. As she mixes whimsy with dark humour, it is surprising how funny The Bloody Chamber can get. Gone are the pretensions of ‘bleak environments should cause a bleak reading experience.’ Angela Carter is willing to have fun with her storytelling, and although her sense of humour isn’t that pronounced, it is there.

The Use Of Fairytale References

Not only does The Bloody Chamber make references to established fairytales: Little Red Riding Hood, Sleeping Beauty and Snow White, but Angela Carter seeks to fuse them together. In The Snow Child, it’s unclear whether Carter is referencing Snow White, the medieval fabliaux Snow Child, or The Snow, The Crow & The Blood.

This may frustrate some readers, but ultimately, Carter’s eclectric influences add to the enchanting mystery present in her stories. It makes them original, too! In The Lady Of The House of Love, we witness a Sleeping Beauty-esque tale, but it’s make heartbreaking with a WWI allusion.

Because of this richness, The Bloody Chamber and Other Stories is not just ‘another fairytale retelling.’ No, it stands on its own, with its unique value.

The Motif Of Desire

Many characters in The Bloody Chamber wrestle with desire, especially female characters. This is certainly true in The Courtship Of Mr. Lyon, which is the more ‘traditional’ of Angela Carter’s fairytale versions. However, the Tiger’s Bride is a great take on ‘desire’. Without spoiling anything, it’s certainly a unique interpretation of Beauty & The Beast.

What Angela Carter does well is her acceptance of ‘feminine’ desire. She’s not interested in shunning or ignoring the wants of her female characters. Rather, Carter is interested in engaging with them, even if they are evil (see: The Werewolf).

Angela Carter’s close look of the dark, demonic side of human desire makes her prose unflinching and powerful. She doesn’t hold back from revealing the monsters lurking nearby.

The Use Of Animal Imagery

Carter’s stories are wrapped in animal imagery, whether a lion, or a raven. The animal kingdom is on display in Angela Carter’s prose with a spice of fairytale magic.

The line between ‘beast’ and ‘man’ is blurry in The Bloody Chamber and Other Stories. Humans have the features of animals, whereas the beasts have the hearts of men. This allows for untold potential: animal / human interactions not often featured in fiction. However, Angela Carter lets her beasts serve symbolic purposes. The archetype of a ‘brave’ and ’emotional’ lion is prominent in The Courtship Of Mr. Lyon.

The end result is nothing short of terrific.

Not So Happily Ever After? Love And Marriage, According To Angela Carter

What makes Angela Carter stand out from other fairytale writers is her twist on ‘happily ever afters.’ Some of her stories end in tragedy, whilst others are ironic, or feature a triumphant heroine. One of the most unique depictions of love and marriage is The Company Of Wolves. The imagery of trickery and seduction is far-fetched, particularly in a Little Red Riding Hood context. But for Angela Carter’s fairytales, it works.

The Bloody Chamber collection encourages us to think of the far-fetched, the ridiculous and the offensive. That’s certainly part of its charm, and why the fairytales are cherished decades later. Angela Carter displays the magic existing in our ‘ordinary’ world and the enchantments of plain objects. Because of this, we read her fairytales as if we were part of them, for better or for worse.

What are your thoughts on Angela Carter’s fairytales? Do you have a favourite one? Comment below!